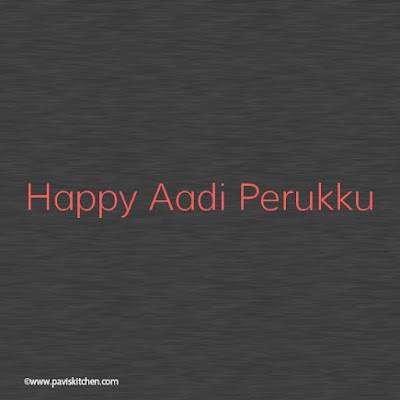 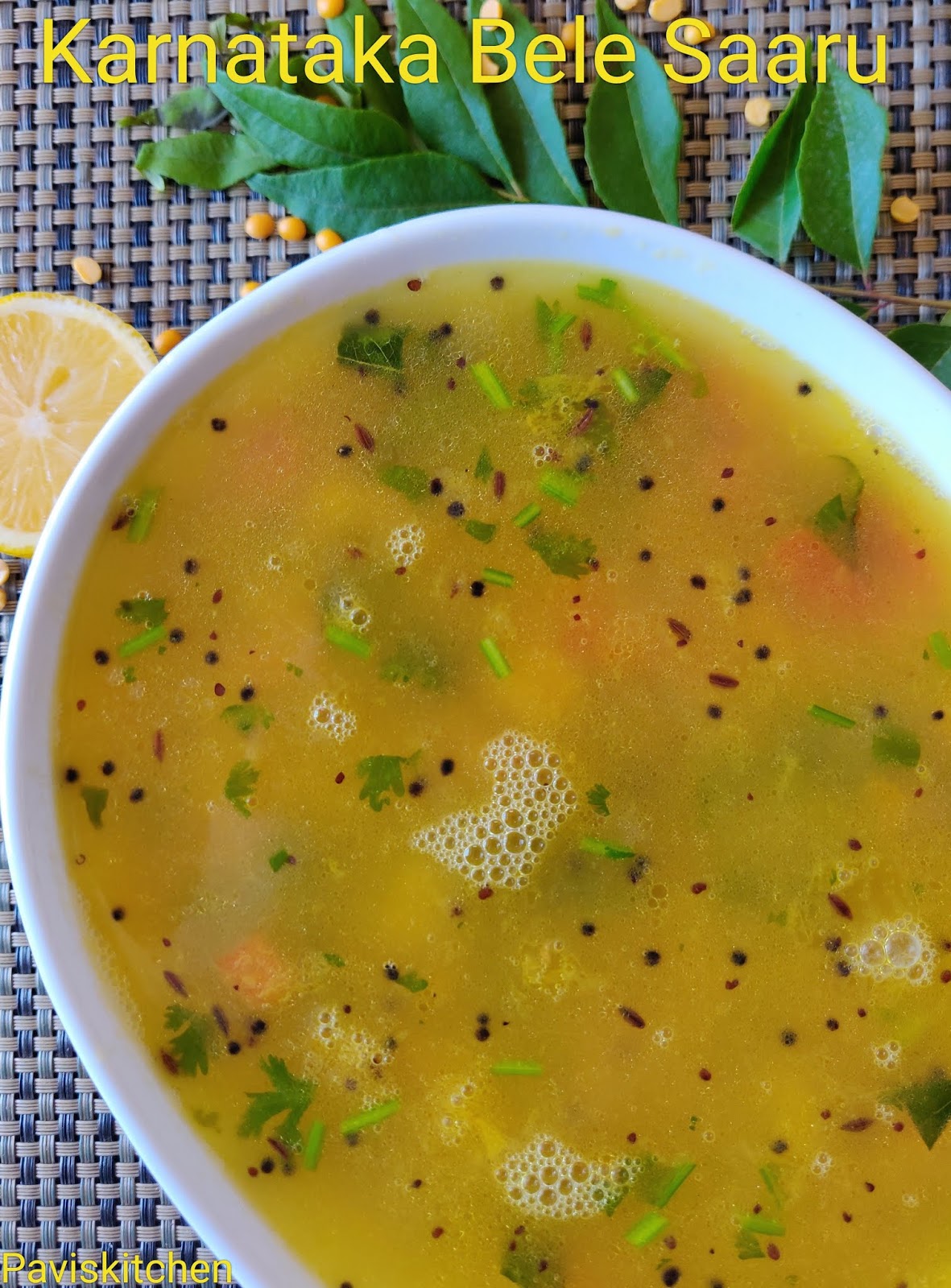 Karnataka style togari bele saaru recipe. Bele Saaru Recipe | Togari Bele Saaru | Tovve Recipe | Bele Sambar Recipe with detailed step by step photos. Bele saaru recipe | bele Saru tovve recipe is a Karnataka recipe. Bele means dal, saaru means rasam, togari means toor dal in Kannada.  Bele Saaru is also known as thogari/togari bele or tovve/toyi saaru. It is quite different from our usual Tamil Nadu paruppu rasam recipe which basically needs rasam powder. Paruppu means dal in Tamil.  I learned this recipe from my ammama (grandma). She is a great cook and my inspiration behind Pavi's Kitchen.  She was born and brought up in Udipi and all of my traditional Karnataka recipes are taken from her cookbook. This recipe  calls for toor dal and tomato as the main ingredients.  In this recipe, we do not add tamarind pulp .  Authentic Karnataka recipes include Southekayi Hasi Goju   and  Pineapple/Ananas Sasive .  Check out my Kosambari Recipes as well. Our entire  ho
continue reading... 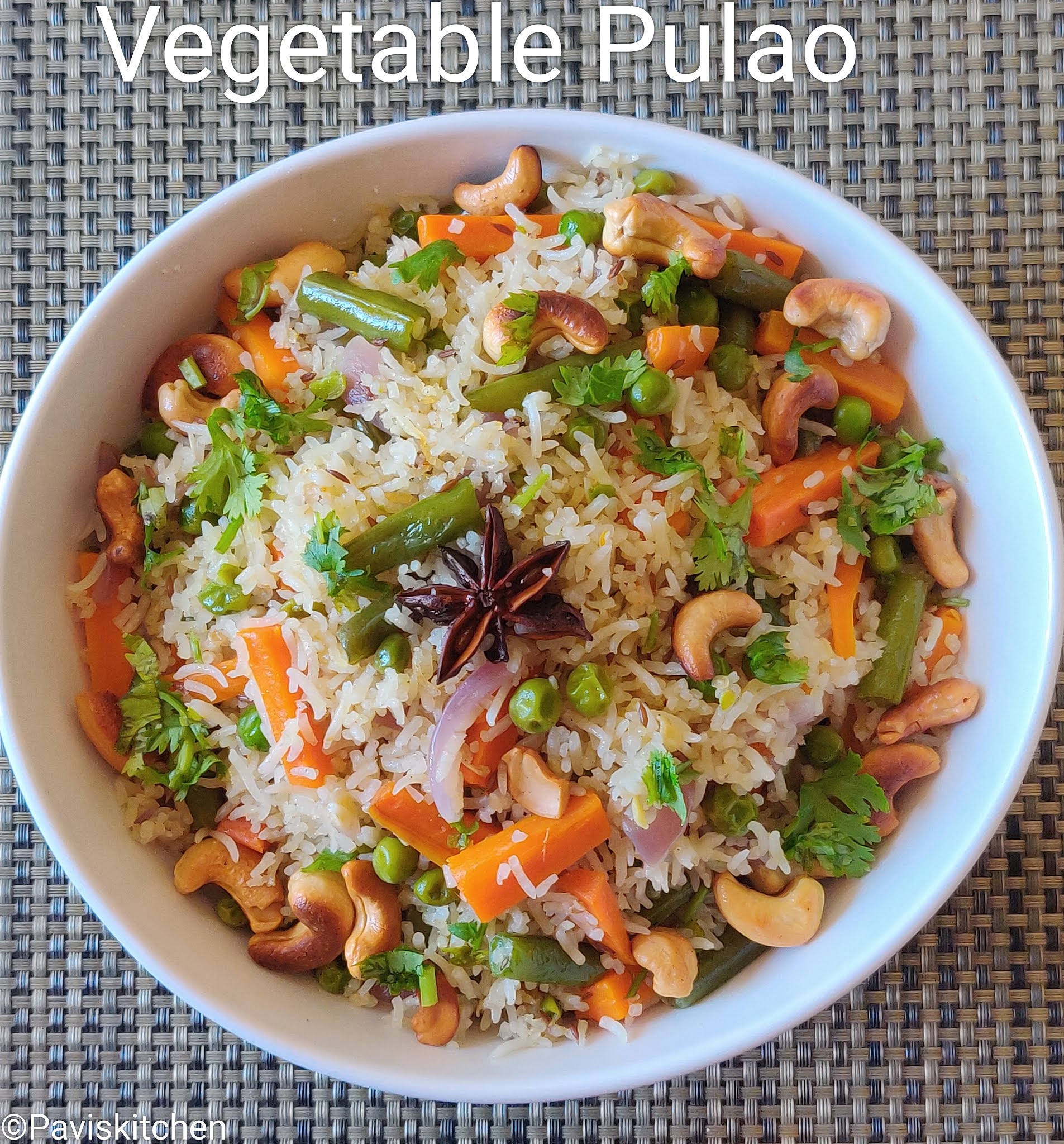 Vegetable Pulao | Veg Pulav | Vegetable Rice  Vegetable pulao recipe | Vegetable pulav recipe | Veg Pulav | One-pot veg rice  with detailed step by step photos and procedure. Vegetable Pulao or Pulav is a one-pot rice variety. It is very easy to prepare. Pulao is the first dish that comes to my mind whenever I have fresh green beans, carrots, and peas are in stock. Here, I have used frozen peas in this recipe. Feel free to experiment with other veggies like cauliflower, baby corn, broccoli, cabbage, and potato. There are several varieties of pulao/pulav, which are green peas pulao, sweet corn pulao, cashew pulao, paneer pulao, Kashmiri pulav...the list goes on. I love all the varieties and planning to post it in my blog as and when I make, so stay tuned to Pavi's Kitchen. Alright without any further delay let's get into the recipe. Recipe:  Vegetable Pulao | Vegetable Pulav  Serves: 3 Prep time - 15 min | Cook time - 20 mins  Cuisine - Indian Region - South Indian Course -
continue reading... 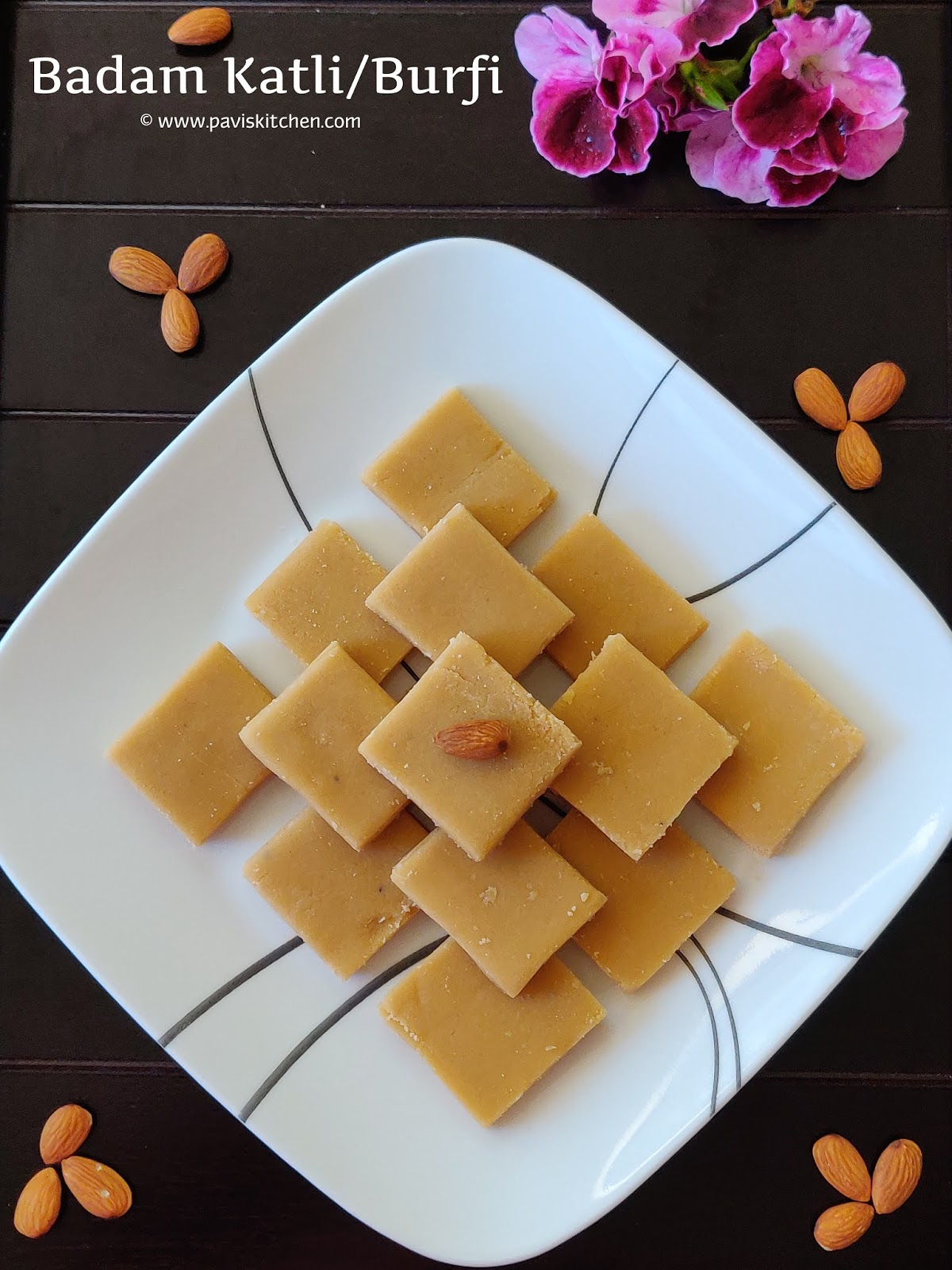 Badam Katli Recipe | Almond Burfi With Almond Flour Badam katli recipe  |  almond katli recipe | almond burfi with almond flour | badam burfi with almond flour  is a traditional Indian sweet made during festivals such as Diwali, Holi, and Navaratri.  Almond burfi with almond flour is a rich and wholesome dessert.  Irresistibly delicious in taste. It has a soft texture that is so addictive to eat and the mildly sweet flavor would surely make you crave for more katlis. The term burfi is derived from the Persian word barf, which means snow. It is a type of fudge or mithai that is usually made from powdered nuts like almonds, cashews, pistachios, walnuts, etc. This badam katli is a vegan recipe, an  Indian style almond fudge  which is semi-dry on the outside and has a soft & chewy texture. It is traditionally cut into a diamond shape and the thickness varies from quarter to half-inch in size. In India, katli is sometimes called Katri which means "slice", and burfi
continue reading... 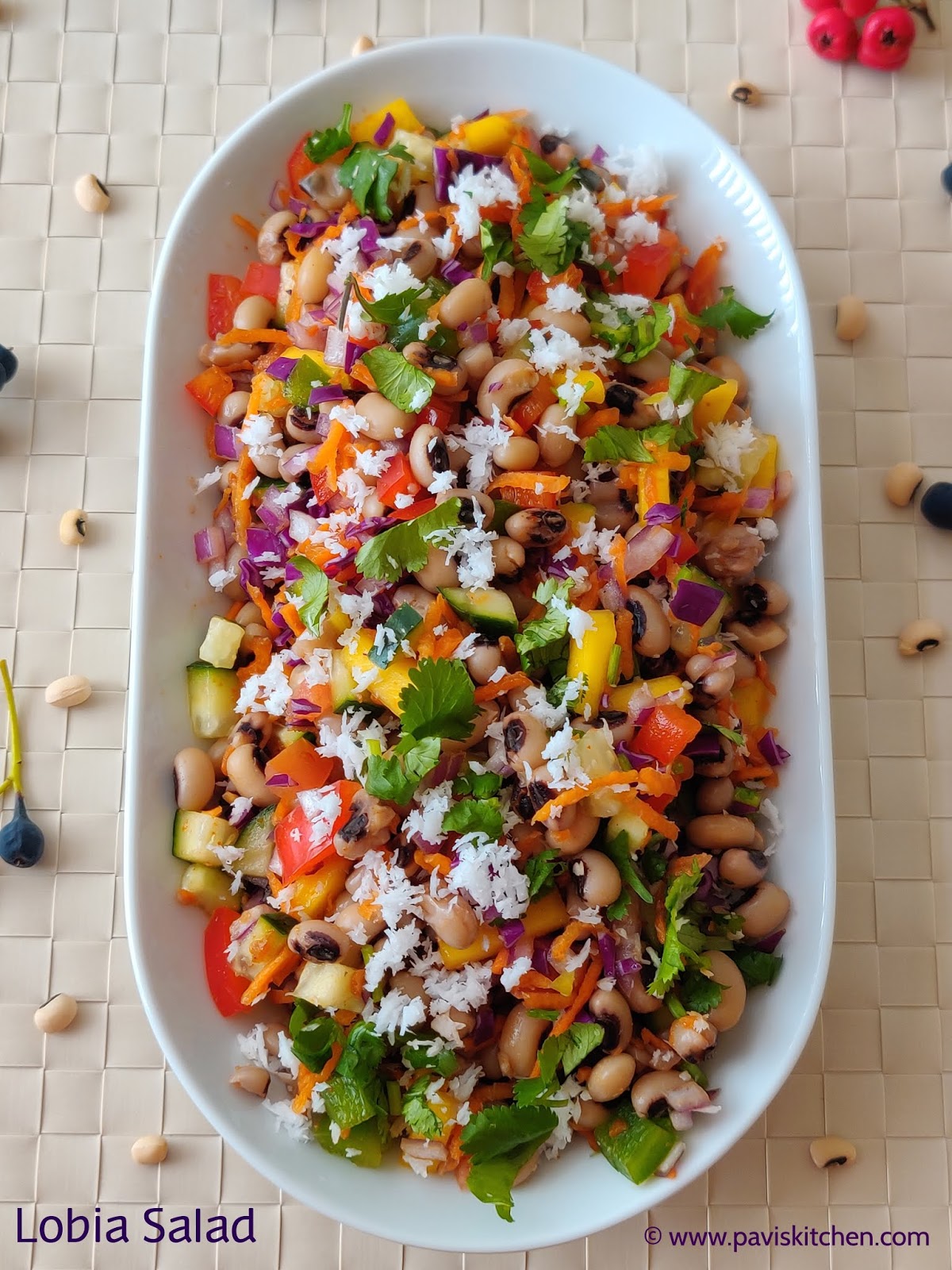 Karamani Salad | Lobia Chaat Recipe | Black Eyed Beans Chaat Lobia salad recipe | lobia chaat recipe | karamani salad recipes | black-eyed beans chaat | rongi salad with detailed step by step images, lobia nutrition facts, and calories. The other names for black-eyed beans are black-eyed peas, cowpeas, goat peas, lobia, lobya, rongi, chawli. karamani, or thattapayaru in Tamil, alsande kalu in Kannada, and alasandalu in Telugu. Lobia is packed with nutrients, vitamins, and minerals. You all know that I'm a salad person and love to try various kinds of salads for our lunch. Plus, adding a cup of boiled beans in the regular veg salad supplies a lot of protein which in turn gives a satiated feeling for a longer time. In this lobia salad recipe , I have combined around 9 assorted varieties of veggies to make it healthy and wholesome and also offers a diverse flavor. The boiled bean has a soft firm texture with a nutty flavor, and the bell pepper has a crunchy texture. Plus, the
continue reading... 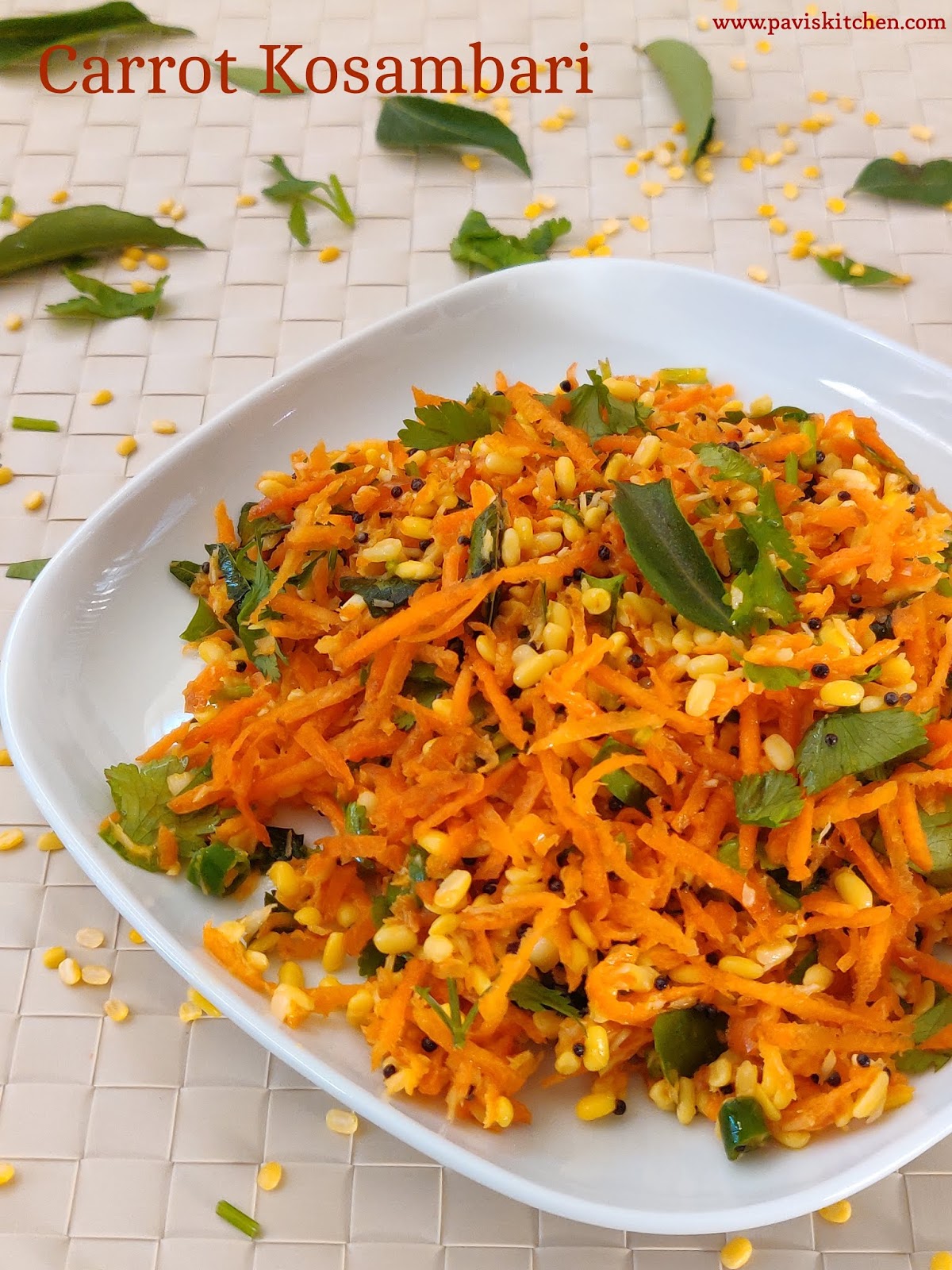 Carrot moong dal Salad | Hesaru bele carrot kosambari | Carrot kosumalli. Learn how to make carrot moong dal salad | hesaru bele carrot kosambari recipe | carrot kosumalli recipe  with detailed step by step images, health benefits, nutrition facts & calories. Kosambari is a healthy and tasty vegetable salad. Hesaru bele means yellow moong dal in Kannada. Kosambari is also called kosumalli in Tamil and koshambari or koshimbir in Hindi. We can also say carrot lentil salad. Kosambari is a very popular South Indian salad. It is a refreshing and nutritious salad that is prepared especially during festivals like Rama Navami, Ganesh Chaturthi, Gowri pooja, Navaratri, and wedding feasts. I love to have this kosambari as a mid-morning snack, it is scrumptious and filling. Raw vegetables are alkaline in nature, which are packed with nutrients, vitamins, and minerals, so you need not wait for special occasions to have this carrot kosumalli . It is a simple recipe and easy to prepare as
continue reading... 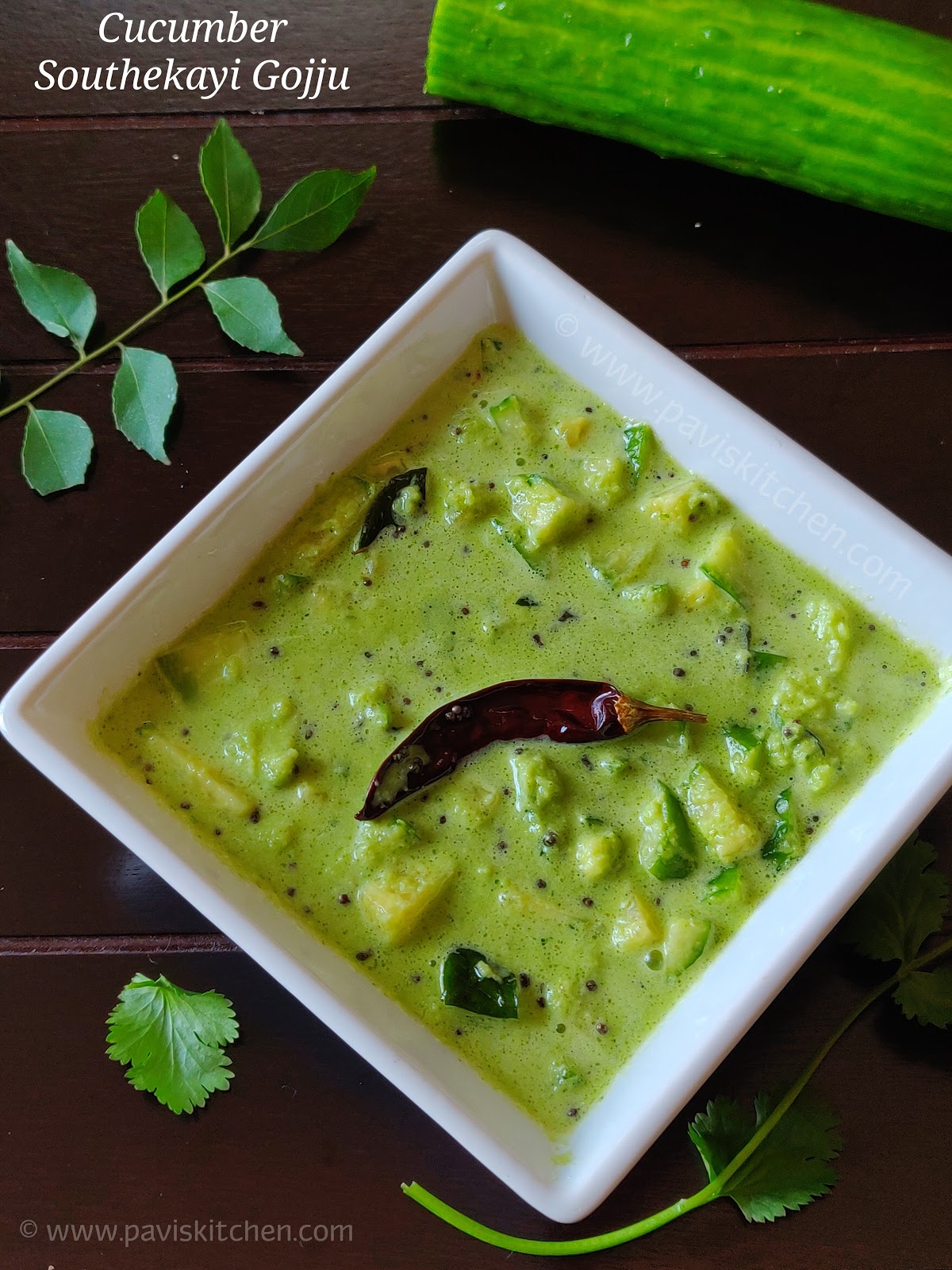 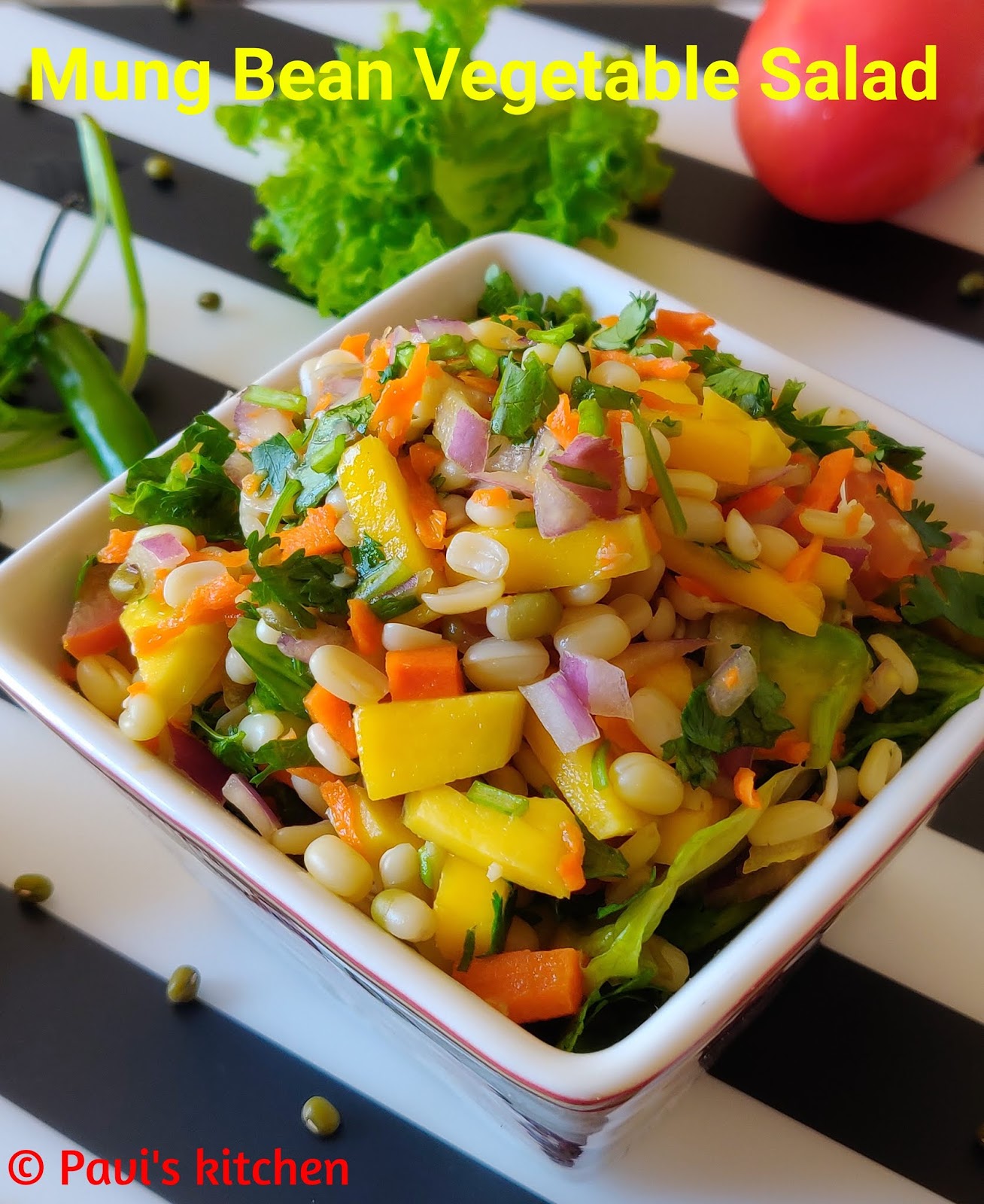 Indian Mung Bean Salad Recipe Mung bean salad | Boiled moong dal salad Indian style | pachai payaru recipe with detailed step by step photos. Looking for a healthy and delicious salad? Here it is...yummy and tummy-filling salad bowl. An interesting mung bean vegetable salad recipe , with lots of colorful veggies and steamed green mung beans, it tastes super delicious. I incorporate this dish into my diet at least once a week and try to make the regular salad as interesting as possible in different ways. Mung bean has numerous benefits and very healthy for skin and hair. I also use this as a face pack apart from food, green gram powder with rosewater pack helps to eliminate excess oil on my face.  Mung bean can be used in many ways, you can soak the mung beans overnight and use it in a salad form or steam it to make sundal (sundal means boiled dal with seasoning), moong dal subzi for rice, and roti.  Today, I'm making a boiled mung bean vegetable salad, the vegetables, measureme
continue reading... 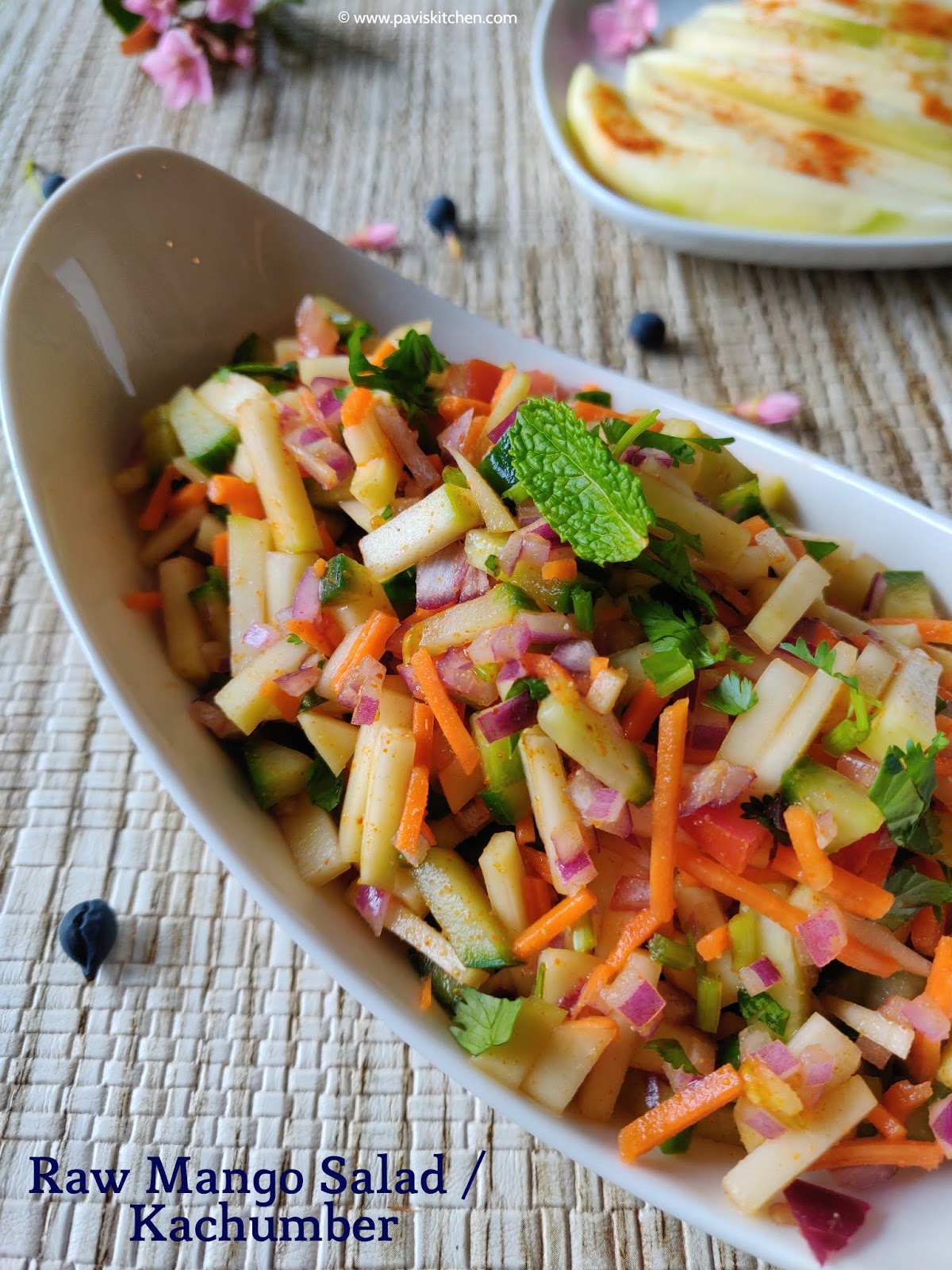 Indian Green Mango Salad Recipe Green mango salad | raw mango kachumber   recipe | raw mango kosambari with detailed step by step photos.  Mango kachumber is a crunchy and tangy vegetable salad. It  is a spicy salad which can be served as a side dish for rice and roti. Further, it is a perfect summer salad recipe and there is no tadka/oil dressing.  You can even keep this salad as a base for bhel puri or masala puri chaat. I had tried this mango salad with bhel puri it tasted really good. Mango season is around the corner in San Diego and I have been seeing some fresh green mangoes in our nearby grocery store. So it is time to make mango recipes and post it on my blog, stay tuned to Pavi's Kitchen!:) Recipe - Green Mango Salad | Raw Mango Kachumber | Mango kosambari Serves - 2  Cuisine - Indian Course - Salad  Prep time - 15 mins  Diet - Vegetarian, and Vegan Author - Pavithra Green mango kachumber ingredients: 1. Raw Mango - 1 medium 2. Onion - 1 Small
continue reading... 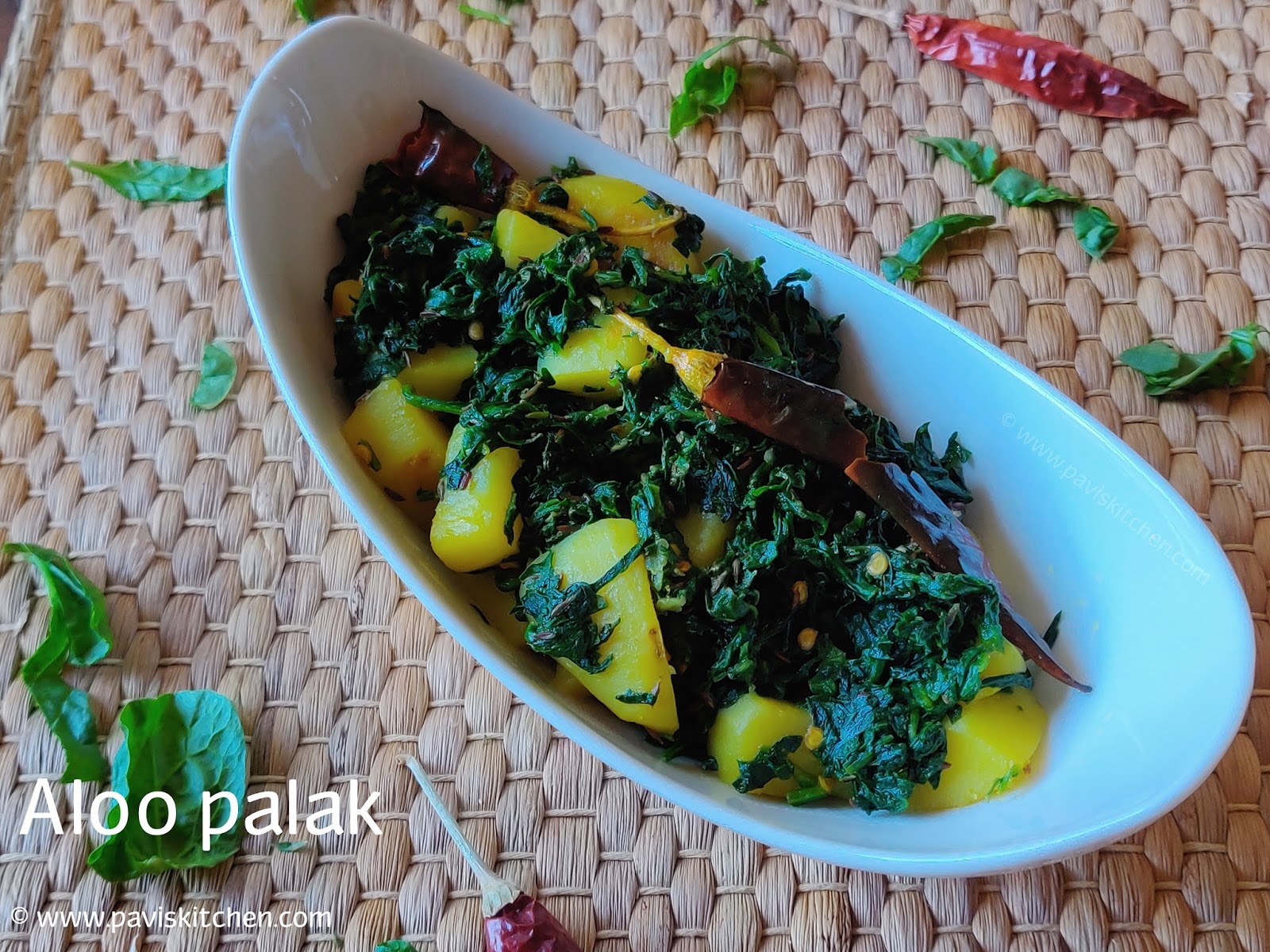 Aloo palak recipe | Spinach and potato Curry | saag aloo Aloo palak recipe dry | Punjabi aloo palak | s pinach and potato curry | saag  aloo recipe | sukhe aloo palak ki recipe | how to make aloo palak  with step by step procedure, photos, health benefits, and calorie chart. Aloo palak is a dry curry made from boiled potatoes, spinach, and Indian spices. It is a healthy and tasty side dish for roti, rice, and poori/puri. This dry version of spinach potato curry is a no onion no garlic recipe . It is a mild spicy curry that tastes best with rice. It is also easy and quick to make. Palak aloo curry  is a one-pot recipe that can be prepared in no time.  Aloo/alu denotes potato, saag/palak means spinach, and sukhe indicates "dry" in Hindi. Further, the leftover aloo palak curry can be used to make bread sandwiches and stuffed parathas too. You can also add red chili and coriander powder for the spice. So feel free to use the flavoring ingredients as per your family
continue reading... 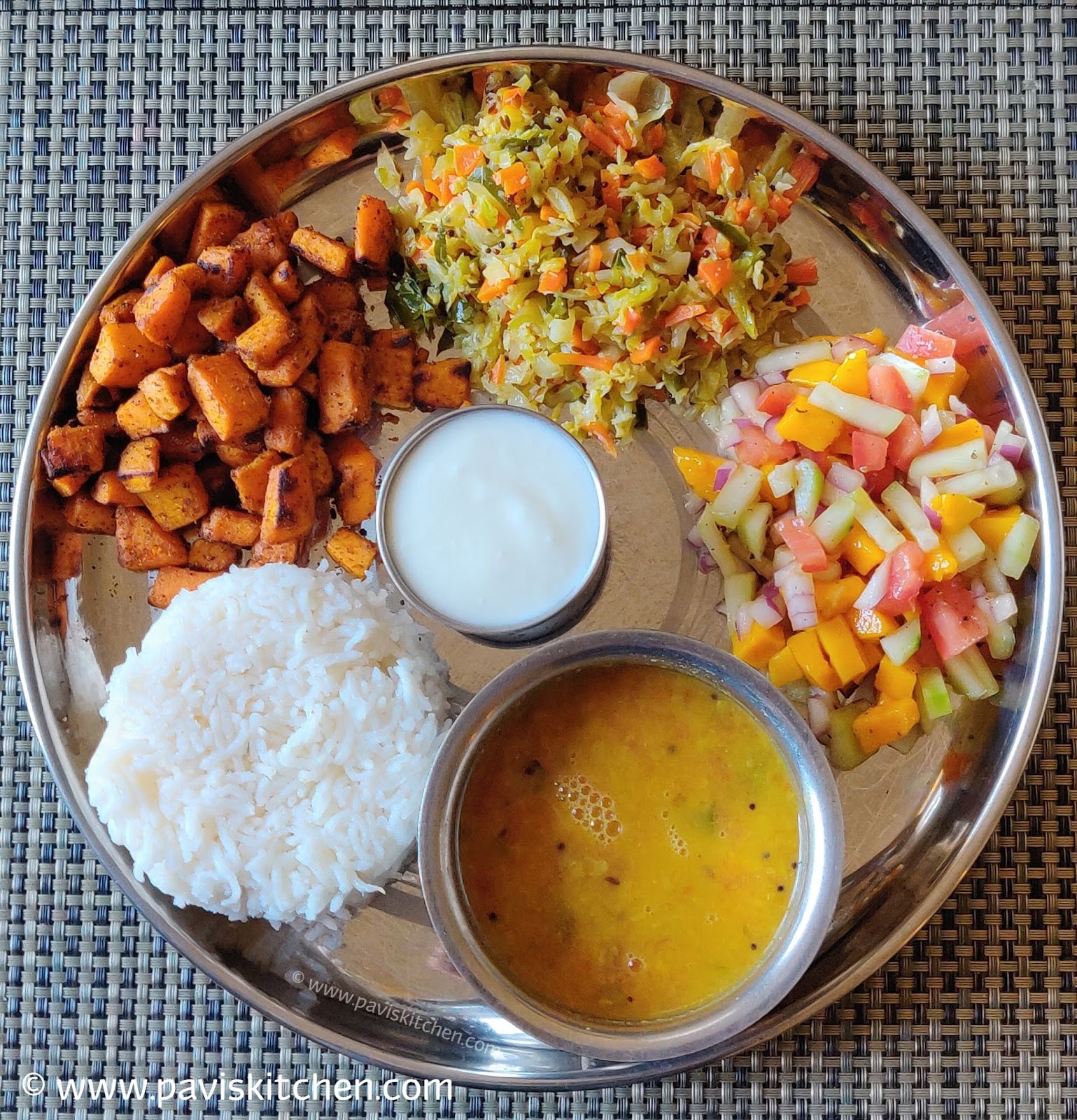 Veg South Indian Thali Recipe | South Indian Lunch Menu List The Veg South Indian Thali Recipe | South Indian Lunch Menu List with step by step photo and procedures. As per Wikipedia, the word "Thali" refers to a round platter that is used to serve a variety of foods. It is an  Indian style full course meal served on the metal plate. Each and every state and region has its own way of serving food on the thali. Usually, the thali comprises six flavors which include sweet, salt, bitter, sour, astringent, and spicy on a single plate. As per our Indian food custom and Ayurveda, a proper and balanced meal should be a perfect balance of all these six flavors. In today's recipe post, we are going to learn how to make a simple and healthy  South Indian vegetarian thali  with step by step procedure. It just takes one hour to make this delicious meal. Every day, I prepare 5 dishes for our lunch which include salad, rice, dal, dry curry/poriyal, and buttermilk. This i
continue reading... 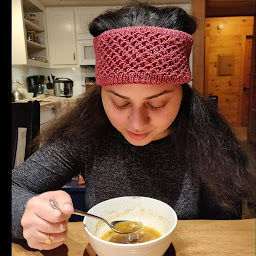 Pavithra
San Diego, California, United States
Hi everyone, Welcome to my food blog. I am Pavithra, the author, photographer, and website designer behind Pavis Kitchen. If you are looking for healthy and delicious recipes, then you are in the right place. Seduce your taste buds with my authentic Indian vegetarian and vegan recipes. Thank you for stopping by!